It started Monday when Facebook announced, “Jimmy Kaplan posted a link to a news story. Yesterday at 9:11pm.”

That’s how I discovered that we have a new Wisconsin state tourism logo and a marketing motto. Do you remember “Life’s So Good,” which the Tourism Department stopped using a year ago? I read the article and saw a lone Facebook comment from Chris Tarr at 9:24pm March 16:

“Not a fan. Not sure what “Living like you mean it” has to do with Wisconsin. Might as well go with “Wisconsin: It’s a state!” or something like that. It’s about as snappy.

“I think this is one of the coolest things they have ever coined… “Live Like You Mean It!”

This morning I see the DCVB Membership Director passionately agrees.
Philip Berndt at 12:16am March 17

“I feel fortunate that I have been involved and followed this very thorough process of distilling the spirit of our State that differentiates our State from others – as defined by our target markets and the people who live here. Perhaps you don’t recognize the importance of a cohesive brand but this is the first time the State has gone through this process to create a focused brand that will guide every branch of our State government. While it seems easy to pick a “lil saying”, a LOT of work was done to find that essence. This is such a HUGE event in my opinion and much bigger than this post and I hope you will take the time to learn more about it and why it was chosen. In short, there was great consensus that people are allowed to be themselves in Wisconsin and that spirit drives the way we welcome others to our state, how we work, how we play, how we live. It’s a reason to visit, to do business here, to do research, to raise a family here and so much more. I think it right on!”

Checking my Twitter feeds @doorcounty this morning I notice that WTMJ Radio’s John Jagler @WTMJohn is tweeting that he, “might have to drive through a mob of mad “mad men” to get into work.  they didn’t like me making fun of the tourism thing. sorry, its lame”

I track down his blog post to learn that ‘Live Like You Mean It’ is not only lame in his opinion, it is also stolen… from Bacardi.

Wisconsin: We have a lame slogan… AND WE STOLE IT!

John Jagler explains, “Remember back in 2005?  When the state unveiled its campaign, it also got busted for swiping.  From the archive file:

Wisconsin’s Tourism Department is scrapping an advertising jingle that drew national attention because it sounded so similar to a song by the British band Supergrass. The department is taking up composer John Tanner’s offer to write a new song for the $2.2 million summer ad campaign, “Wisconsin — Life’s So Good,” spokesman Jerry Huffman said Monday. The state paid Tanner $22,000 to write original music for its campaign, but he offered to write a new song after acknowledging his music closely resembled the 1995 tune “Alright” by Supergrass.

Milwaukee marketing communications firm Red Brown Klé says they created the new logo. Now, my quaint, old-fashioned radio just announced that a California author and a Realtor are also laying claim to having created the phrase, along with five additional entries for the same phrase in the trademark registry.

What do you think of the “new” logo? 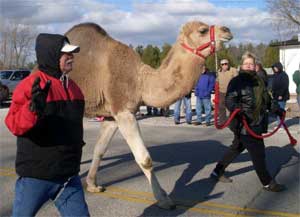