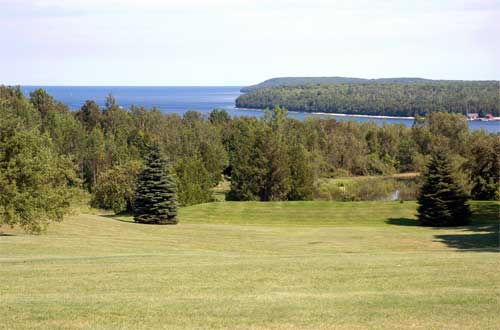 As in years past, the 2012 “Olde Ellison Bay Days” festival will be held the last weekend in June, Friday afternoon thru Sunday afternoon, June 22-24.

This year’s festival promises to be the grandest in its 46-year history because it will celebrate the March 7 acquisition of the scenic 16-acre Ellison Bay overlook traditionally known as “The Grand View” by the Door County Land Trust (DCLT). The new “Grand View Scenic Overlook and Park” will be officially dedicated and opened to the public during Olde Ellison Bay Days on Saturday afternoon at 4 pm, followed by guided hiking tours of the property.

As its name signifies, the property overlooks Green Bay and the rustic shoreline of Ellison Bay, Garrett Bay and Gills Rock from the highest point on North America’s Niagara Escarpment. Formerly privately owned and slated for commercial development, this Door County natural treasure will ultimately be deeded to Liberty Grove Township for long-term management and preservation.

This year’s festival will feature a pie-baking contest on Friday afternoon, a talent show at Shepherd of the Bay Church on Friday evening, the parade and a “slow-bike race” on Saturday morning, gala Arts & Crafts Fair, family fun ranging from kids’ games to Ellison Bay’s signature “water golf shoot-out”, succulent BBQ and picnic fare, and rousing music and entertainment all weekend long… not to mention, fireworks over the Bay and street dancing to cap off Saturday evening’s festivities!

The Ellison Bay Service Club, sponsor of Olde Ellison Bay Days, is dedicated to the enhancement, historic preservation, hospitality, and environmental beautification and conservation of Ellison Bay and the Northern Door.

Ellison Bay is situated on Highway 42 some 45 minutes drive north of Sturgeon Bay, gateway to the Northern Door, offering a variety of attractions and accommodations for visitors. See Portal Wisconsin for more information on Ellison Bay.